How soon will this happen, I wonder?

Of course, Prince’s sister is the Secretary of Education. (Betsy Devos)

Afghan Govt Says No To ‘Private and Profit Driven’ War

The NSC made it clear that as a sovereign nation, we will consider all legal options against those who try to privatize war on our land. 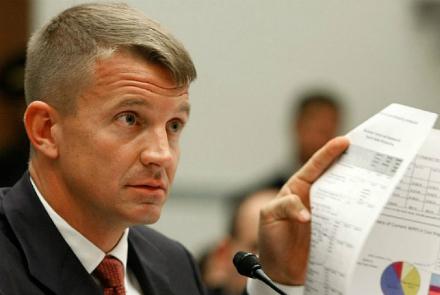 The Afghan Office of the National Security Council (NSC) on Thursday stated government would consider all legal options against anyone who tries to privatize the war in Afghanistan.

This comes on the back of a campaign by the founder and former CEO of Blackwater security company, Erik Prince, who for the past few weeks has been promoting the idea of privatizing the war in the country – by using contractors opposed to foreign troops.

In their statement on Thursday, the NSC rejected outright the notion and said “in no manner does the government of Afghanistan condone this destructive and divisive debate.”

The NSC said the debate around privatizing the Afghan war would “add new foreign and unaccountable elements to our fight.

“This idea violates the principle that Afghans determine their own future. Afghan security and defense forces, under the framework of all applicable laws of the country, have the primary responsibility and authority for safeguarding the noble values of Islam, our national sovereignty, and the independence and territorial integrity of our beloved country and people.”

The NSC emphasized the war on terrorism is led – and will continue to be led – by Afghan national security and defense forces with the support of its international allies.

“Under no circumstances will the Afghan government and people allow the counterterrorism fight to become a private, for-profit business.

“In no manner does the government of Afghanistan condone this destructive and divisive debate. As a sovereign nation, we will consider all legal options against those who try to privatize war on our land.

“The protection of our Islamic values, our national way of life, and our citizens are this government’s most sacred responsibility,”

Prince has meanwhile held numerous interviews with the media over the past few weeks and just late last month he spoke to TOLOnews about his plans to privatize the war.

He said his forces could change the situation in the country within six months.

Defending his plan, he said: “Well, I would say six months after the program is fully ramped up, you have a very different situation on the ground, I will commit to that,” said Prince.

In an earlier interview this year, with the UK’s Independent, Prince again pitched his plan, while last month he told The Hill in an interview that it was not accurate to call it a privatization. “It’s really a rationalization,” he said.

His plan however has been met by resistance from a number of circles and on August 28, US Defense Secretary James Mattis said “it is probably not a wise idea”.

“When Americans put their nation’s credibility on the line, privatizing it is probably not a wise idea,” Mattis said.

Prince’s plans appear to include 3,600 “contracted veteran mentors” from Blackwater who would be deployed to Afghanistan – 36 for each Afghan unit and for two to four years at a time.

“I would use contracted veteran mentors from the US and from NATO, the same countries over here now,” Prince told TOLOnews.

He also stated that the contractors would be equipped with airpower, weapons and would be joined by NATO and Afghan forces on every mission.

“They provide leadership, intelligence, communications, medicals and logistics expertise to their Afghan counterparts and go with them in the field all the time to make sure their Afghan counterparts are paid and fed, that they are well led, that they have a communications plan, all those essential elements of soldiering don’t break down,” he said.

“If one of these contractors I am recommending, does an evil act, intentionally injures a child or something like that, they could be held accountable under the uniform code of military justice here in Kabul, investigated, trialed, incarcerated back in their home country. We have a clear path for accountability,” he said.

Prince meanwhile turned to the media, especially television, after the Trump administration rejected his strategy – touting his plans to outlets around the world.

But the US does not see the need for the war to be privatized. Senior officials said last month that their current course of action under the South Asia Strategy is paying dividends – especially as there are indications that the Taliban could come to the peace talks tables.

It is widely believed by Afghan government leaders, the international community and regional neighbors that there is no military solution to this war and that the only way peace can be achieved is by getting the Taliban to the talks tables.

Prince however recently told the Associated Press that although he had not spoken directly to President Donald Trump at the strategy, he had been told the president showed interest.

Prince is an American businessman and former US Navy SEAL best known for founding the government services and security company Blackwater USA, now known as Academi.

He founded Blackwater Worldwide in 1997 after buying 6,000 acres of the Great Dismal Swamp of North Carolina and set up a school for special operations.

Between the years 1997 to 2010, Blackwater was awarded $2 billion in US government security contracts, more than $1.6 billion of which were unclassified federal contracts and an unknown amount of classified work.

For nine years – between 2001 and 2010, the Central Intelligence Agency (CIA) allegedly awarded his company up to $600 million in classified contracts and it became the largest of the US State Department’s three private security companies.

Blackwater however came under increasing criticism after the Nisour Square massacre in September 2007, in which Blackwater employees opened fire in a crowded square in Baghdad, killing 17 Iraqi civilians and seriously wounding 20 more.

Three Blackwater guards were convicted in October 2014 of 14 manslaughter charges, and another of murder, in a US court.

Prince has since been hired by the crown prince of Abu Dhabi where he was task to assemble an 800-member force of foreign troops for the UAE. He has also trained 2,000 Somalis or anti-piracy oprations in the Gulf of Aden.

The list of Prince’s accomplishments and involvement in foreign governments is lengthy and questions have often been raised over his business dealings.

However Prince has been a Donald Trump supporter and although it is believed he had no formal role in Trump’s transistion, the Federal Bureau of Investigation (FBI) is investigating a Januarly 11, 2017, meeting in the Seychelles at which Prince presented himself as Trump’s unofficial representative.