December 11, 2018, Tuesday. Early morning, 7:15. “Well, here it is Tuesday, ain’t had no news,” as Hank Williams would say. “I’ve got those gone but not forgotten blues.” Nope. Unfortunately not the case.

I had a good sleep. I was up earlier and took a few pictures out my window with my cell phone.

I decided to go ahead and use the three rolls of black and white film that I have here in Calcutta. I will still have some colour film and I will supplement it with my cell phone. The pictures are different, but it is possible to make some with the cell phone. But they are not film! Now these cell phones are ubiquitous.

Being ubiquitous, people do not notice cell phones much. It is film cameras that are rare today.

I will head for Nakhoda Masjid (mosque) today.

3:00 Afternoon. A fine day’s outing, except for the very last, coming through Hogg Market. They spotted fresh meat. The hawkers and milk-powder scamming women were out for me big time there. Those hawkers can really be persistent. Absolutely! They will not let one go till one shouts and curses them out. Even then, they pretend not to understand it and continue! Good thing that I am not from Texas. One of them would surely get floored!

Anyway, I got through there and back to the hotel, after running the gauntlet. And the sons of bitches train those little kids to come after you too! That is really why they do not get more tourists in this country, I believe. So you have to get away from it or go Stark Raving Crazy!

One tends to forget that once out of the country.

So the day was not too bad. Good all around. I gave out the change that I had to beggars along the way. So that is now depleted. I now have nothing for beggars. But the city is so full of them that it hardly makes any difference. One could never have enough change to keep giving it out all day.

I think that the women with babies get to me worse than anything else. Get on my nerves the most. I had nothing to do with you producing the kid. Not me! I am not the guilty party!

Now I have to rest up for the evening. It would be nice to drink a beer. I think that I deserve one after that.

I made 260 photos with my cell phone today. Digital shit, of course.

4:00 Afternoon. I will write up some of my experiences today. In the morning, I went out into the street and got a taxi driver. He didn’t know where I wanted to go, but he pretended to know. I said Nakhoda Masjid. Clear as that. How could one mistake it? I don’t know if they listen carefully. He asked me for 300 rupees. It was way too much, so I agreed for 200.

He started up toward the city center but turned to the east. I told him that it was the wrong way. Because, I knew that the mosque was over to the west. I pointed to the other way, as he probably could not understand what I was saying. He didn’t pay any attention to me and kept going the wrong way.

It was clear to me that he didn’t know where he was going, so I said as clearly as I could “Nakhoda Masjid.” Anyone could understand it, but I think they do not actually listen. Maybe the area goes by a different name in Calcutta. Probably so.

Or maybe he would not think that a foreigner would want to go there!

Finally, I motioned to a guy on the street to ask him. I don’t know why the taxi driver did not ask someone. It seemed like he was a villager who had just come to the city recently. The guy that I asked then told the driver where to go. I knew the general direction. So then he turned around and went to the west, where I had pointed. So it was his fault that he went to the wrong place.

When we got there, I saw the Nakodha Masjid, the Nakhoda Mosque. It is in a rather closed building, not an open area like most mosques are. It was in a market area and I saw the beautiful minarets. Very colorful.

I paid him the 200 rupees, that we had agreed on. But then he asked for 400 rupees, because he had to circle around. But that was not my fault. He just screwed it up. Anyway, 200 was plenty, but I gave him 300 anyway. I knew that he would have to be satisfied with that.

I decided to use my cell phone to take pictures for some time, around the mosque. Actually, people pay less attention to one with a cell phone.

I generally do not make a photo of someone who asks me to make their photo, because they are not usually interesting people.

The other thing is that they may want money. I would rather make candid pictures of people on the street who do not know that they are being photographed.

I had some small ten rupee notes in my bag that I gave to beggars on the street. There were two blind guys across from the mosque and some others.

After a little bit, I got tired of scrabbling with the digital cell phone and got out my Leica M6. I finished the roll of colour film and put in a roll of Kodak Tri-X to push to ISO 1600. I went on down that street and reached the wide boulevard where I was yesterday.

Then I kept walking north on that wide avenue. I finished the roll of black and white in my Leica M6. It was a joy shooting with the Leica after using that joke of a cell phone. Digital bullshit. Horrible shit.

Now I have only two more rolls of black and white film.

There are interesting old buildings along the street close to the mosque to photograph. In one place, guys were constructing things on the street from bamboo. The pieces were laid out on the street.

Getting tired of walking, I got a taxi back to the hotel. I got out near Hogg Market. When the old Hindustan Ambassador taxi was stopped in traffic, I tried taking some shots out the window of the old taxi with the cell phone.

Where the driver sits. The Bengalis have a sense of humor.

“India is Great” painted on the back of buses.

“Blow Horn.” No need to ask that. Everyone does it all the time, anyway. I don’t know what good it does with all the horns going at once. Somehow the traffic snarls get straightened out in time.

Next stop: Lunch after pounding the pavement.

These pictures were taken in December 2018 in Kolkata (Calcutta). I like to use the old name of the city, Calcutta, better. I guess I just got used to that. A great city, which would be educational for anyone to visit.

These pictures were made with my cell phone. I normally shoot film, but I was running out of film, so I had to take some pictures that way.

A street scene with an old classical building. Part of the picture is underexposed, due to the shitty quality one sometimes gets with a cell phone. 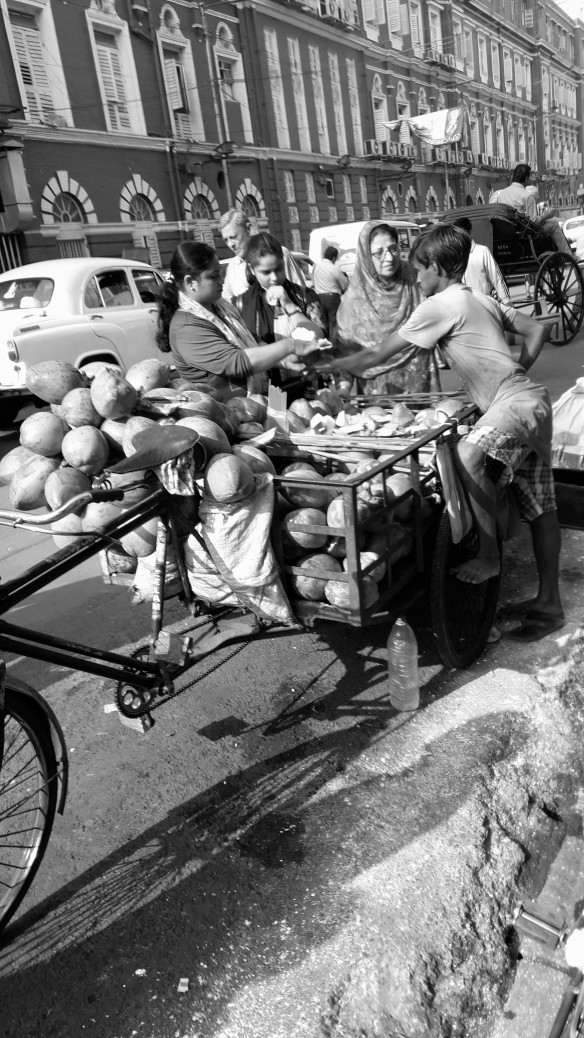 Selling fresh coconuts on the street. These are cut open for the juice inside. Much more healthy that drinking Coke or Pepsi.

An ice cream vendor in the evening.

There are still these old-fashioned types of rickshaws on the streets. It seems that they should be banned, but they provide some way for some people to make a sort of living. Personally, I would not want to take one of these. It just seems too inhumane.

Inside an old Hindustan Ambassador taxi. I love these old cars, based on a 1940s British model. They are like something out of the 1950s. They are no longer made in India. The drivers put their little Hindu gods and goddesses on the dash board. Amusing. They are supposed to be metered, but generally, one just agrees to a price to go somewhere.

Alongside a city bus. Some of the public transport buses are in quite poor shape and incredibly crowded.

I am not sure if this emergency exit would be very useful in the event of an accident. It might just be a case of bending over and kissing one’s sweet ass goodbye. WB is West Bengal state. 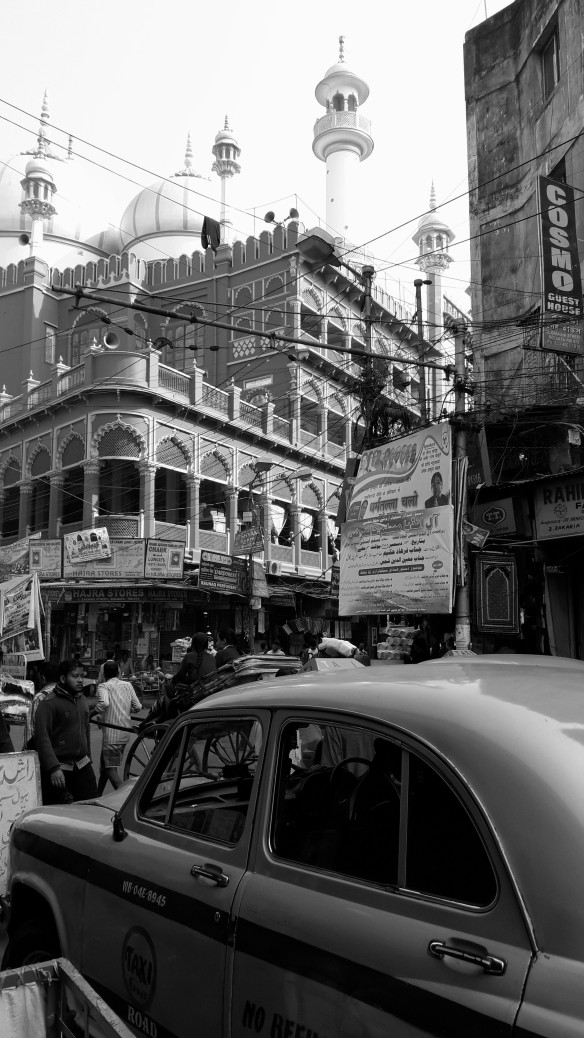 A large mosque in a Moslem section of the city. Some people do not realize that a large number of Moslems live in India. In fact, it is a major Moslem country in terms of numbers of Moslems. It is the Nakhoda Masjid (Mosque).

An older man in traditional Islamic dress. Don’t think there is any danger to foreigners here. People are fine and quite friendly. So one can feel quite at home, if that person is used to living and travelling in foreign countries. 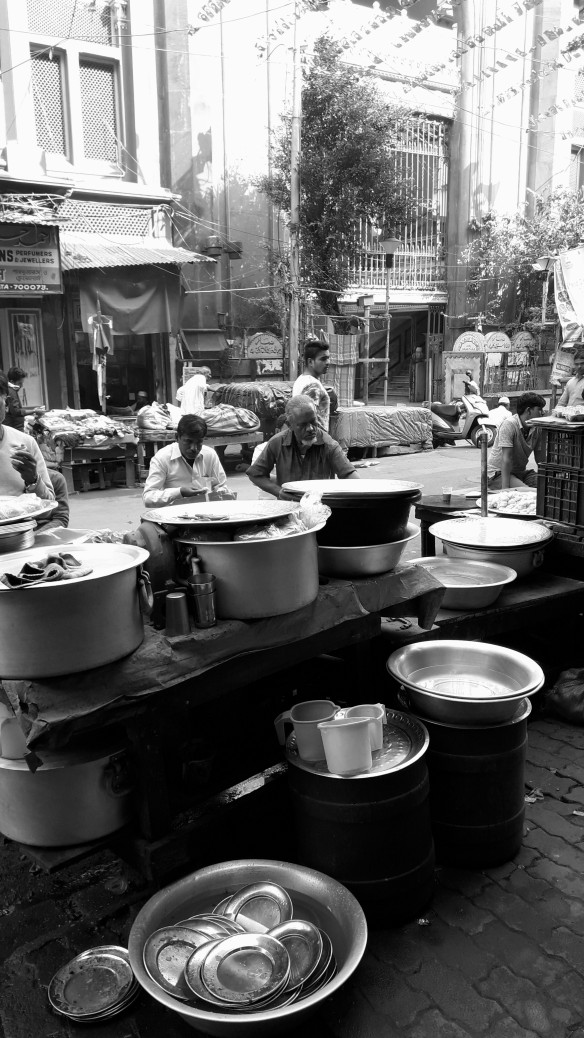 A typical street-food place in Calcutta. It is a cheap place to eat and usually the food is quite good. On a holiday, it might not be the best idea. One must be acclimatized to Indian food. 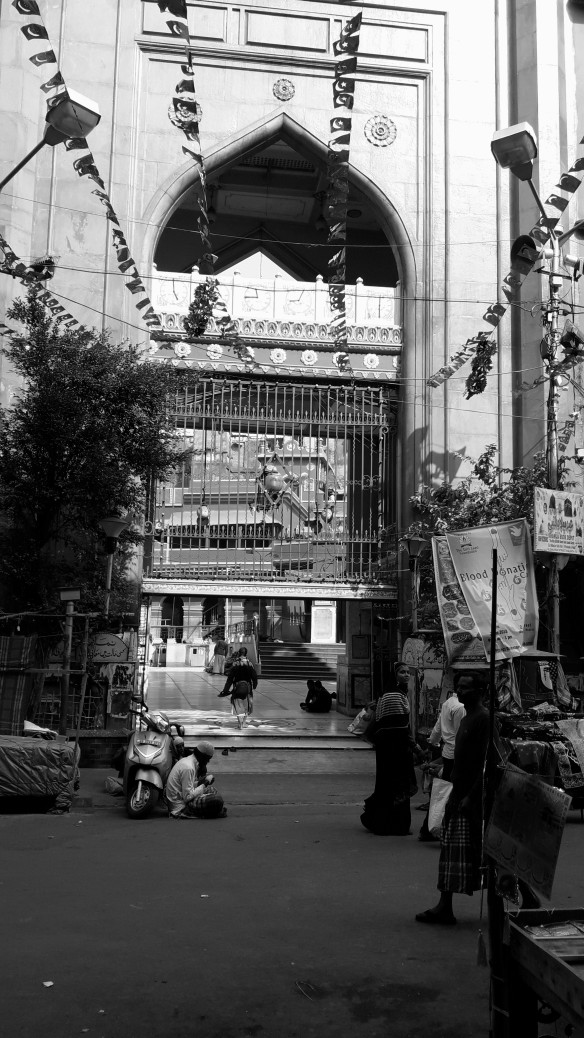 The entrance to Nakhoda Mosque. Personally, I generally avoid anything having to do with religion. It makes life a hell of a lot easier. 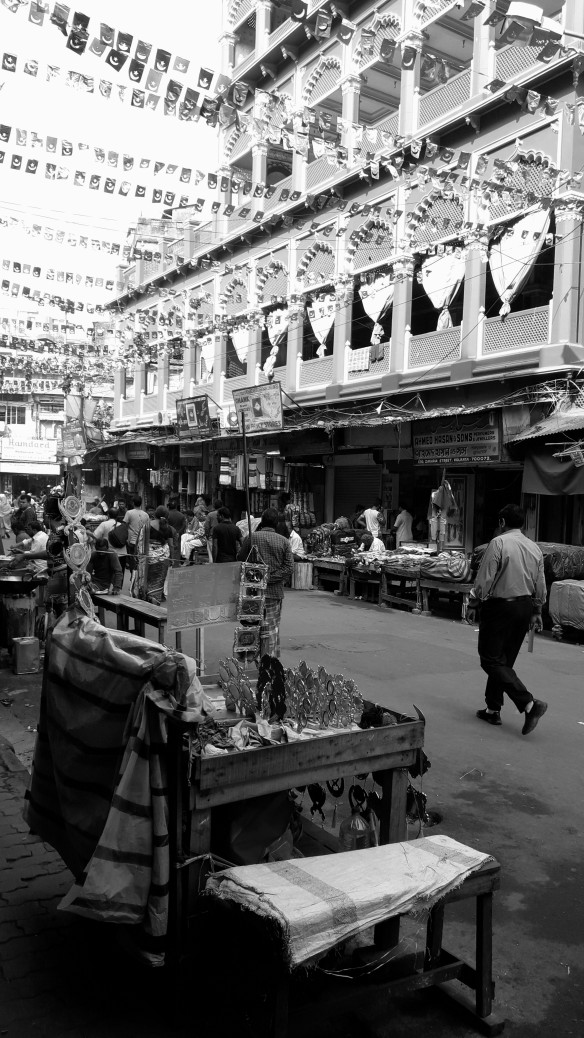 A street in front of the Mosque.

This poor son of a bitch is having a hard day every day. Why wouldn’t he be wise to welcome a communist revolution? Actually the Marxists ruled West Bengal for many years, but didn’t do enough for the masses. If one compares this with China, one has to appreciate what a great success Mao was in modernizing China. Almost everything that Americans use these days is made in China. 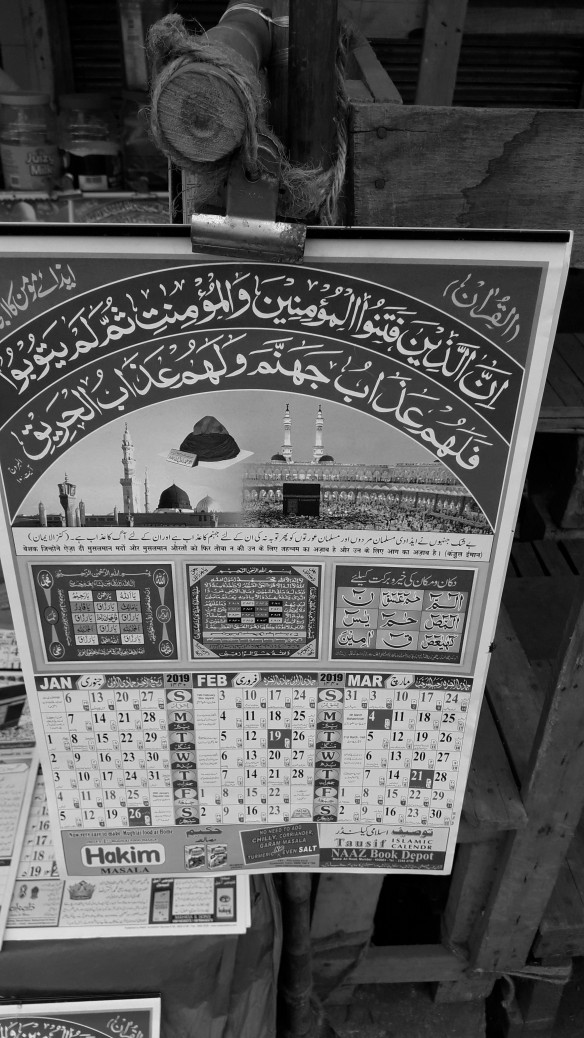 A calendar in Urdu, English and probably Hindi. The print is a little hard to make out. 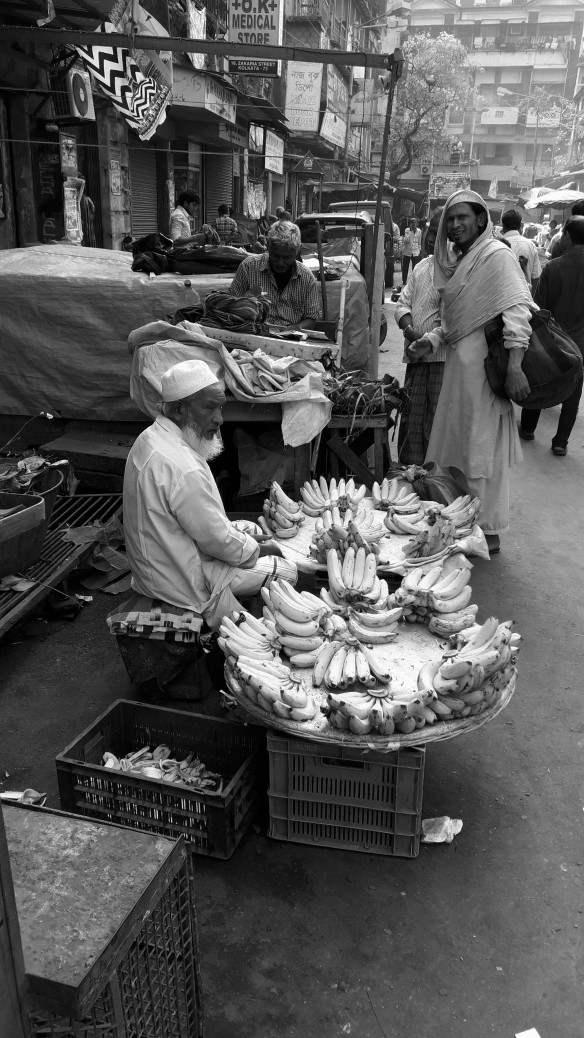 These bananas are very tasty as they are generally ripened naturally and grown locally. Fruit is plentiful all through the year.

Indian capitalism has turned this poor guy into a human draft animal. Shouldn’t he be loyal to an economic system that treats him worse than a horse or a bullock? Where is the claim for justice and human rights? Why would such a person be worse off under communism?

Another street seller. He is an entrepreneur. 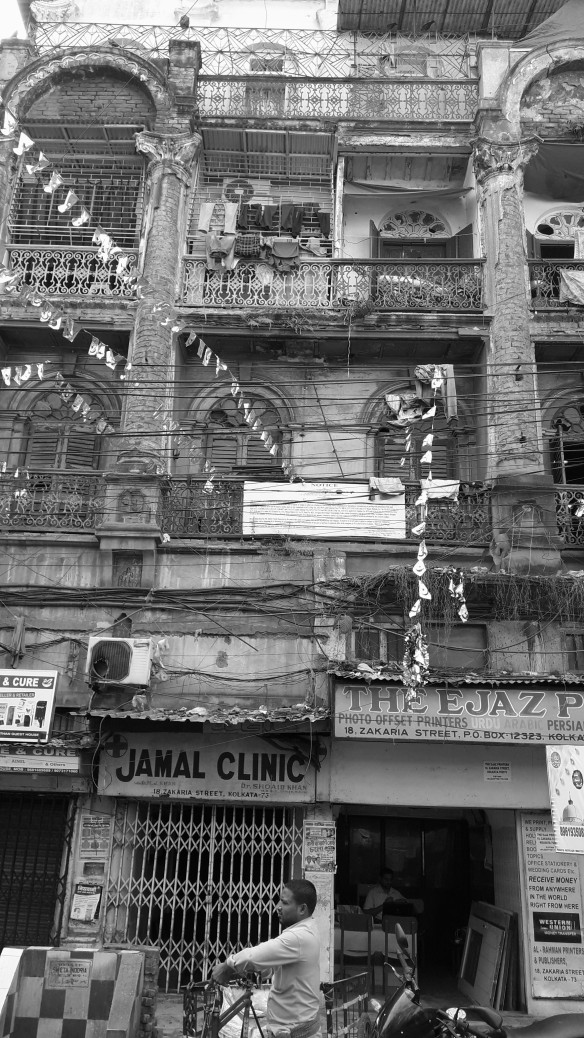 Another old classical building, now falling into decay. Want to compare this to what one sees in Shanghai? Now who says that Mao was not successful in developing China. Mao laid the foundation for capitalist China today. Yes, it is capitalist, but east Asian state-guided capitalism, not the wild west yahoo capitalism that has ripped the USA to hell. In the USA, corporate capitalists are the ruling class. Bezos with Amazon made profits of eight billion and is paying no taxes at all to the state. Now that is a hell of a ruling class. A hell of a democracy!

Getting fat with street profits. 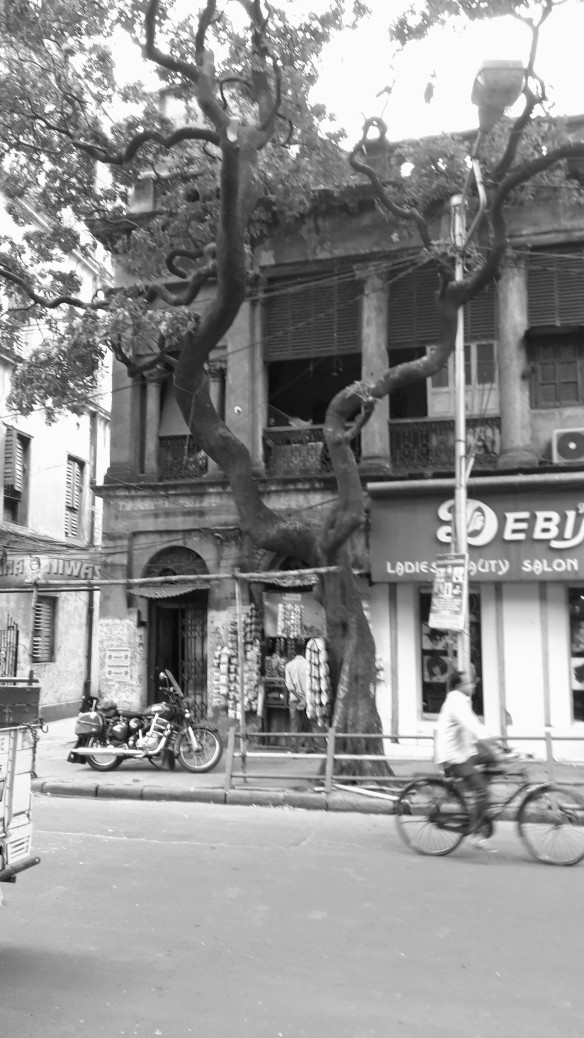 Street scene, Calcutta. One might want to take a trip to Calcutta and see how Indian capitalism is treating the masses. One might learn some things that are not taught by professors in Economics 101. Most of those teaching the courses have never ever taken a trip outside the USA! That could make one think a little bit about what is going on in the world.